Captain Alan Osowski is the District Commander of DeBary Florida and is a senior member of Volusia County Sheriff's Office in Florida.

He was promoted to Captain by Sheriff Johnson in February 2003 and is a 26 year veteran of the force.

In October 2003, the British High Court in London UK heard a Hague Convention hearing filed by Barbara Greig of the US Department of State on behalf of Emily's mom, Sheila Fuith, to determine the jurisdiction for where custody proceedings should take place. The High Court ruled, very bizarrely, that Florida had jurisdiction (but more on that later), and Emily was sent to Florida for hearings to take place BUT on condition she was to commence receiving medical treatment forthwith for her eye condition (and to date that still has not happened).

No sooner had her mother arrived in Florida than Sheila commenced filing complaints to the British and Florida police that she was being stalked, harassed and threatened by Emily's dad (4,000 miles away in England). Ignoring the British High Court order she went into hiding and denied Emily her medical treatment for her blindness among many other things. 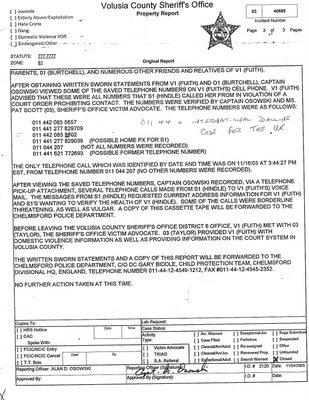 So is this false reporting by Captain Osowski?

Firstly, note the first paragraph on the extract - "Captain Osowski viewed some of the saved numbers on the V1 (Fuith's) cell phone.....the numbers were verified by Captain Osowski and Ms Pat Scott (03)" 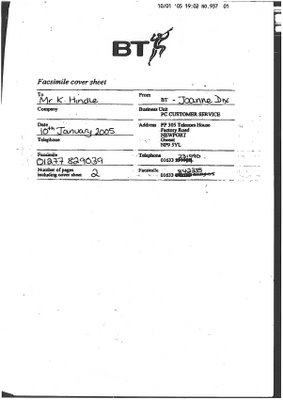 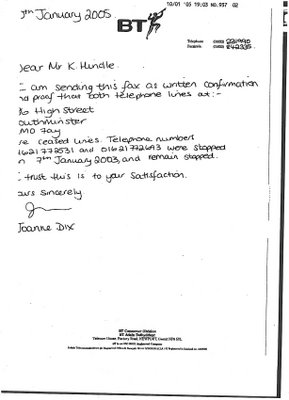 On p2 you can see that the telephone number ++1621 772693 had been DISCONNECTED on January 7th 2003 - THERE IS THEREFORE NO POSSIBILITY THAT CAPTAIN OSOWSKI "VERIFIED" OR OTHERWISE LOGGED THIS NUMBER AS CALLING THE MOTHER'S CELL PHONE ALMOST A YEAR LATER.

The second proof that Captain Osowski falsified his police report comes from his own testimony - on February 10th 2005, Captain Osowski and other VCSO officers were deposed: 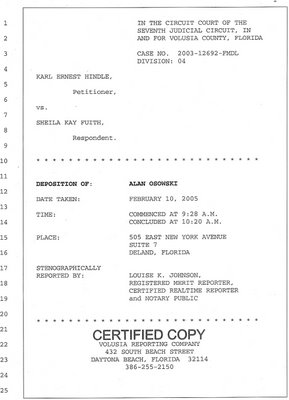 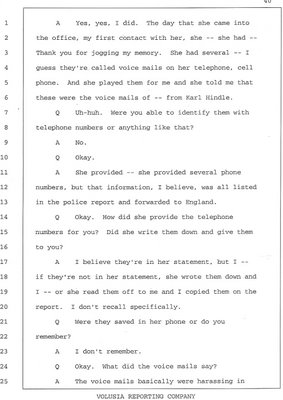 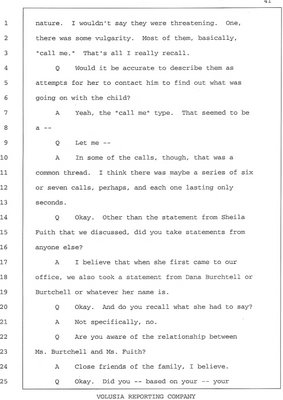 Detective Biddle of the British police concluded that Sheila Fuith was making FALSE ALLEGATIONS and moving around the US to hide Emily from her dad and to evade the legal process in the US.

On 29th April 2004, a domestic violence injunction hearing was heard before Judge Doyle in DeLand Florida - Judge Doyle dismissed the petition ruling it was clear that the proceedings were being brought to gain advantage in the custody case.

Notwithstanding this, Barbara Greig at the US Department of State used this and other VCSO reports to make a case for Emily's dad to be arrested by US Immigration and deported when he had been cleared of all the allegations by Judge Doyle in Florida - here's her fax to US Immigration: 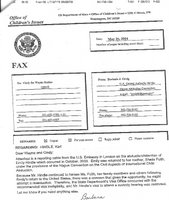 In short, Barbara Greig and Sheila Fuith failed to stop Emily's dad from bringing proceedings, failed to keep him out of the country and failed to obtain a domestic violence injunction against him....so they misled US Immigration to do the dirty work for them......Emily later disappeared to become classified as missing and endangered and to continue to be denied medical treatment for her blindness.....now WHY would a State Department official ignore a Florida judges ruling, a British High Court ruling and a 2 month investigation by British police and do this ?

The answer I believe, is linked to why the British High Court would send a British child to Florida for custody hearings when Florida did not have jurisdiction AND assist in Emily's initial abduction from the UK in February 2003....more on that later.
Posted by Emily's Dad at 5:10 PM

Is this cop still in a job ?

26 years in he's close to retiring, what a joke.

Did the police know about the med problem and what did CPS do about this ?

This is just plain dumb but kudos for getting Emily back

My child was taken from the Lebanon while my wife and I were working there. We are both American.

After my wife and child went back to the US, I contacted the State Department for help and dealt with Ann McGahuey at Office of Childrens Issues and had dealings with her boss Glenn Keiser.

There was a lot of runaround bullshit, State didn't know anything, what did it matter my kid was back home and that kind of thing.

I know that McGahuey knew more than she let on and Keiser definitley did - he's a lying f*ck, says one thing one time and something completely different the next and started making out I was mentally unstable and needed help.

I haven't seen my kid since and don't think I ever will again but one thing I do know is that State and OCI are corrupt, they just make things happen and it happens, after that you just have to deal with it.

Get yourelf a life, if State is involved you won't see her much or ever.

A parent cannot abandon their child. The bond can't truly be broken. The state tortures the children and then wonders what is wrong with society and the rate of violent teens....

my four kids were erronousely taken from me here in lake city, florida after ony 15 days of living here. long story. i need help. legal help. i am disabled, and my parents are behind all of this. florida is very corrupt.
call me. monique baugus in lake city. i need help. 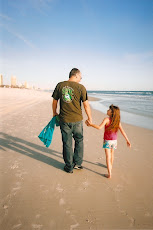